A United Atlanta Stands Stronger Together

Atlanta is known for many things: the capital of the South; home to the world’s busiest airport; Southern hospitality; our great sports teams; a city of trees; and the cradle of the civil rights movement. We are also known for our embrace of diversity and the unity of our multiplicity of neighborhoods.

The rise in violent crime throughout Atlanta and the region has frayed the fabric that has kept our city and neighborhoods united. A case in point is that an organized group in Buckhead is raising money to lobby the state legislature to hold a referendum to separate from the city.

Certainly, Buckhead residents and businesses have legitimate reasons to be upset with the City of Atlanta about crime and other issues. Violent crime is at an unacceptable and dangerous level. Additionally, establishments posing as restaurants but operating illegally as bars are not shut down. Illegal street racing is a menace. Business investment in Buckhead is threatened due to the crime wave. And the Atlanta Police Department is understaffed and demoralized.

It is entirely reasonable for Buckhead residents to feel they aren’t getting value for the taxes they pay.

To many though, the answer is not secession. Rather, the answer is for residents in Buckhead – and throughout the city – to demand that our next mayor and city council lead, reform city government, listen to the people, be present in the community and be fully accountable.

Now, as much as at any time in our history, Atlantans need to come together across racial, geographic and economic differences to find common ground and address the issues that affect us all.

That is why a group of concerned community and business leaders have formed the Committee for a United Atlanta (https://www.committeeforaunitedatlanta.com/). Prominent attorney Linda Klein and former State Representative Edward Lindsey co-chair the committee. Linda was the first female president of the State Bar of Georgia, former president of the American Bar Association and currently is a senior managing shareholder at the Baker Donelson law firm and a Buckhead resident. Edward is an attorney with the Dentons law firm who served for a decade as a member of the Georgia House of Representatives, and whose district included Buckhead.

The Committee for a United Atlanta intends to communicate with and educate the public on the dangers of the attempt by some to separate selected portions of Buckhead from the City of Atlanta. The Committee intends to reach out directly to neighborhoods in Buckhead and create a dialogue on how best to address issues like crime, zoning and infrastructure while informing residents on the realities of tearing our city apart.

As was previously reported in The Atlanta Journal-Constitution, with approximately 90,000 residents, Buckhead contains almost 20% of the City of Atlanta’s population. But it also contains about 40% of the assessed value of real estate in the City. As a result, carving off Buckhead will have a crippling impact on the City of Atlanta’s finances and bond ratings that will weaken the future prospects of the capital city of Georgia. A weaker Atlanta won’t make Buckhead safer.

A new city would also mean that Buckhead residents would almost certainly pay more in taxes for water and sewer and public debt obligations, and a separation would damage the business reputation of the region and state, hindering future investments.

Furthermore, Georgia’s constitution prevents the creation of a new city school system anywhere in the state. Where, then, would the thousands of Buckhead kids go to public school if a new city were created? The current public schools are owned by the Atlanta Public School (APS) System, but the students in a new city would now be the responsibility of Fulton County.  It is highly doubtful that an intergovernmental agreement between APS and a new Buckhead city would be likely and legal.

Creating a new city has been characterized as a common occurrence. However, prior to becoming cities, Sandy Springs and Brookhaven were unincorporated parts of Fulton County and DeKalb County. Buckhead is an incorporated part of the City of Atlanta. De-annexing a part of a city has never been done before in Georgia.

Is the threat of Buckhead separating from the city real? Absolutely, although the process to create a new city is lengthy and complicated. A cityhood bill has been introduced in the legislature. Now a feasibility study needs to be done to determine if cityhood is viable. Then the Georgia House and Senate need to pass legislation for the governor to sign. If that is completed, a referendum is placed on the ballot, allowing only voters in the selected area of Buckhead to choose whether they would like their community to form a new city. The voters in other parts of Atlanta – including those parts of Buckhead the advocates choose to exclude – would not get to participate in the referendum.

Rather than engage in such a divisive and complex legal effort, the Committee for a United Atlanta will work to help elect a city government that will improve public safety and city services and restore public confidence. United, Atlantans can build a more cohesive, equitable, safe and prosperous city for all. 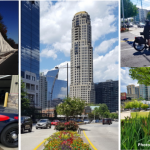