Amy Knopf is a Managing Director and the Head of Asset Management at Jamestown where she oversees a $12 billion portfolio of properties in major US markets. Jamestown is a design-focused real estate investment and management company with a 35+ year track record and a clear mission to transform spaces into innovation hubs and community centers. Jamestown’s current and previous iconic projects include Chelsea Market in New York City, Industry City in Brooklyn, Buckhead Village District and Ponce City Market in Atlanta, Ghirardelli Square in San Francisco, and the Innovation and Design Building in Boston. The company has headquarters in Atlanta, Georgia and Cologne, Germany with offices in Amsterdam, Bogotá, Boston, Los Angeles, New York, and San Francisco.

Since joining Jamestown in 2010, Amy has held several roles in the company with increasing breadth and responsibility. Some of her accomplishments include helping to launch the company’s institutional platform through the Premier Property Fund in 2011 and leading the company’s efforts to streamline operations across its portfolio. In her role as Managing Director of Asset Management, Amy has built a high performing team committed to delivering outstanding real estate environments that support the communities in which they reside.

Amy received a Bachelor of Science in Finance from the Kelley School of Business at Indiana University and is consistently involved in the Atlanta community, where she has served or serves on several boards, including the Jewish Federation of Greater Atlanta, the Atlanta Beltline Special Service District Advisory Committee and The Epstein School Board of Trustees. 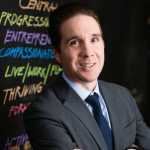