This is a Saporta Report Thought Leadership piece by Jim Durrett, Buckhead CID Executive Director/President of the Buckhead Coalition and  Tony Peters, BCID Director of Capital Projects and Programs

What really sets metro Atlanta’s community improvement districts (CIDs) apart from similar groups across the country that mostly go by the term business improvement districts (BIDs) is our emphasis on capital projects. These are the infrastructure projects that consume the lion’s share of our budgets and which often attract additional funding from local, state and federal government sources.

These projects usually involve years of preparation, from problem identification to construction of the ultimate solution. We go through project conceptualization, public input, design, engineering, regulatory approvals, and right-of-way acquisition before the public sees the first sign that improvements are imminent. As it happens, 2021 will be a big year for finishing a lot of prep work in Buckhead and actually “turning dirt.” Here is what you can expect this year.

We had planned to be under construction already on the final phase of the three-phase Peachtree Complete Street project that began in the early 2000s. It was designed to redevelop what I have called a traffic sewer into an attractive, complete street by adding granite curbing and medians, hardwood trees, seasonal color landscaping, wide sidewalks, bike lanes, modern lighting, buried utility lines, street furniture and turn lanes at signaled intersections. The first phase of the project, which runs from GA 400 to one block south of Piedmont Road at Maple Drive, was completed in 2007. The second phase spans from GA 400 to the intersection of Roxboro Road and Peachtree Road and was completed in 2012. The CID looks forward to beginning construction of the third and final phase from Maple Drive to Shadowlawn Avenue this summer. 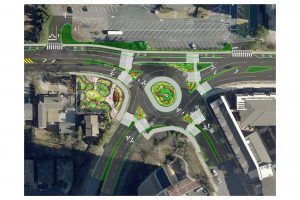 Engineering design is almost finished for a roundabout at the intersection of Wieuca Road and Phipps Boulevard. After quite a bit of study and stakeholder engagement, a roundabout was determined to be the best solution for this dangerous intersection. If all goes as planned, construction will begin this summer.

The Piedmont Road Complete Street project from Peachtree Road to Lenox Road will increase efficiency for everyone who travels that corridor, whether on foot, by bike or by car. The project will add a 10 to 12-foot-wide multi-use path on the west side of Piedmont, and the added travel lanes will help process vehicles more effectively, ultimately calming traffic. Construction will begin by this fall.

Another complete street project is currently planned for Lenox Road, fulfilling the first phase of the action plan laid out in the Lenox Road Scoping Study completed in 2017. This project will create a multi-use trail to resemble a boardwalk, or linear park, along the west side of Lenox Road between Peachtree Road and the Lenox MARTA Station on East Paces Ferry Road. Construction will begin this summer.

And in the meantime, we will be completing the construction of the streetscape improvements begun last year in the Buckhead Village where we have added much-needed pedestrian facilities and streetscape elements including sidewalks, pedestrian lighting and street trees to the area bounded by Roswell Road, West Paces Ferry Road and East Andrews Drive, as well as new stormwater infrastructure along Roswell Road and East Andrews Drive. The construction on this project will be fully complete by late spring.

We should probably hang a big sign over our district that states, “Pardon our progress!” 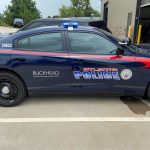 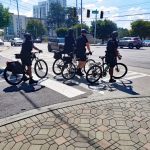