It’s been a little over a month since the GA-400 flyover ramps officially opened for business. The $21 million project offers a new way to relieve congestion on several streets near GA-400, allowing commuters on GA-400S to exit directly to I-85N and those on I-85S to exit directly to GA-400N for the first time. But, as the ramps move into their second month of operation, reports show that it is not attracting as many cars as expected. What is the problem, Atlanta?

Prior to the ramps’ opening, the Georgia Department of Transportation estimated that more than 32,000 cars would use them each day, which would ease major traffic congestion. The results of these new ramps would be smoother traffic flow on GA-400 and I-85, meaning fewer accidents and less pollution. Congestion would be reduced on Sidney Marcus Boulevard, Lenox Road and Buford Highway. Sounds great, right?

However, as WXIA recently reported, while the ramp was projected to take as many as 6,000 cars off of the old route, the DOT is reporting that the actual number of cars using the ramp isn’t even close to that number. Only 473 vehicles travelled on the ramp during a 2-hour stretch of one morning rush, while more than 5,000 cars still traveled on Sidney Marcus.

Atlanta is notorious for its hair-pulling traffic and any new roadway designed to help commuters should be a welcome change. Travelers took to the Hartsfield-Jackson International Airport’s international terminal when it first opened and thousands of commuters flocked to GA-400 once the toll plazas were demolished. So what’s the holdup with the flyover ramps?

Perhaps people have gotten so used to their usual routine they haven’t yet realized this project’s benefit. Or maybe commuters are still avoiding GA-400 due to some traffic congestion caused by the ongoing construction to remove the old toll plazas and restructure traffic flow. Whatever the reason, I hope Atlanta drivers will soon discover that the flyover ramps are a real benefit and the kind of infrastructure that can help our city grow.

Have you used the new flyover ramps? Tell us what you think. If you haven’t, I encourage you to consider a new route for your commute – try a test-run and see how it could help improve your drive home. Tweet me at www.twitter.com/BuckheadCID and join the conversation. 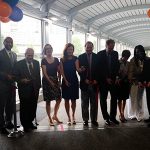 A Great Day for BuckheadBlog, featured