Zone 2, which comprises the entire Greater Buckhead area, was formally acknowledged with the Crime Reduction Award for achieving the greatest reduction in overall Part 1 Crimes for 2021. Zone 2 was down 8% in crime compared with 2020, and down 12% compared with 2019. By comparison, the city overall was down 1%. This was a tremendous accomplishment during a year in which we experienced a reopening of our city and a return to our normal daily influx of people to work, shop and play in Buckhead. There are several things which factored into our success, and I will address those shortly, but I want to address our challenges as well. Although only accounting for 9% of the total crime in Zone 2, violent crime was up 15% in 2021. The persistent presence of “waterboys” on our streets also continues to be a serious problem. While I am proud of what we have accomplished, I want to acknowledge that we still have challenges to address and want to stress how important the crimes we are experiencing are to residents and visitors of Buckhead. That being said, here are the main reasons why I believe we have achieved our level of success.

The Atlanta Police Department’s mission statement is to create a safer Atlanta by reducing crime, ensuring the safety of our residents and building trust in partnership with our community. As someone who has worked in just about every area of the city and who has commanded multiple Zones, I can say that the Zone 2 community is one of the most highly engaged and proactive communities in the city. This zone has always looked to partner with the Atlanta Police Department to support and help develop solutions to problems that impact public safety. My experience has taught me that this level of engagement is always synonymous with success. Furthermore, the Zone 2 Precinct’s success could not have come without our collaborative relationship with the Buckhead Coalition and programs that we implemented together during this past year. The addition of two new Dodge Chargers, which are cobranded with the APD and BCID logos, provided an enhanced visual presence and crime-fighting capabilities for the off-duty APD officers who took part in the BCID-funded supplemental patrols throughout the weeks. Additionally, the roll-out of the off-duty APD bike patrol enabled us to intricately patrol our commercial areas and parking decks. This program funded by the BCID within the CID’s boundaries helped deter property-based crimes and provide a level of accessibility to the public that is simply not present with officers driving around in motor vehicles. Both programs played an integral part in reducing crime with the BCID and helped us mitigate some of the late-night establishment-related problems that we experienced along Pharr Road during the previous year.

Another piece of the Zone 2 crime fighting strategy was to create a way to focus on Zone 2’s Beat 211. Beat 211 has historically been one of the top two beats that drive crime in the Zone. More specifically, the Lindbergh/Morosgo neighborhood has been the epicenter of criminal activity on this beat. It has a combination of Part 1 crimes (auto thefts, car break-ins, robberies, aggravated assaults, etc.) as well as quality of life issues. During the early summer of 2021, we received numerous complaints from the business community in the Lindbergh/Morosgo neighborhood involving plain-view narcotics consumption and dealing, alcohol consumption, panhandling, disorderly conduct, criminal trespassing and criminal damage to property. By the end of the first six months of 2021, the Lindbergh/Morosgo Neighborhood had already experienced a 34% increase in total Part 1 Crimes. During the beginning of July 2021, we made the decision to form a permanently assigned on-duty bike unit from 10 a.m. to 6 p.m. Monday through Friday.

This unit was deployed into a focused area of operation which is bordered by the MARTA tracks to the west, the interstate to the east, Sidney Marcus Blvd. to the north and Lindbergh to the south. Their mission was to engage with the community through visible patrols and “drop-ins,” enforce ordinances and be a deterrent to criminals who were targeting the area to commit Part 1 crimes – replicating what we were already doing within the BCID footprint. Another intended outcome was to reduce the chance of more violent criminal activity in the area later in the evening by “sweeping” the area during the day to set a clean table for the evening watch. We also reached out to MARTA PD’s Northern Station Commander. This forged a partnership in which MARTA committed to having two officers on patrol with Zone 2’s bike unit. During the past six months of deployment which closed out 2021, the bike unit conducted 465 drop-ins, 592 directed patrols and 407 suspicious person stops. They also made 156 arrests, including five felony, one misdemeanor, 52 city charges and three outstanding warrants. All of this activity factored into a 32% reduction in Part 1 crimes during their six months of deployment and a YTD 7.4% reduction of crime for the Lindbergh/Morosgo neighborhood. These statistics coupled with a dramatic drop in complaints from the residents and businesses showed just how impactful the deployment of a small but highly proactive team of officers can be in a focused area of operation. The dramatic reduction in crime on Beat 211 was a huge factor in reducing the Zone’s overall crime numbers.

Yet another component of our crime fighting efforts was the presence of APD’s Special Operations resources that operated within Zone 2. These resources included our Motors Unit, High Intensity Traffic Unit, the Auto Crimes Enforcement Unit, among others. Having these additional resources available is one of the benefits of being a part of the largest law enforcement organizations in the region. The visibility that these units provided along with their proactive enforcement efforts were complementary to Zone 2’s.

We’re honored to earn the Crime Reduction Award and I could not be prouder of the efforts of the officers assigned to our three watches. These are the officers who are primarily responsible for handling all our 911 calls for service. They are an extremely busy bunch, but still manage to be proactive crimefighters between calls. They understand that they are more than just call-takers and that their true value and ability to impact crime lies in what they do during their discretionary time. Since taking command of Zone 2, it has been my goal to leverage the largest group of crime-fighter that we have – the beat officers – to achieve our commitment to the community to reduce crime. Proactive enforcement has been instilled into the culture of Zone 2. We established work standards that were practical and achievable for all officers while consistently emphasizing the importance of sharing the load as a team in order to achieve our mission. According to our metrics of proactivity, Zone 2 officers outperformed every other zone this year. Based on all our performance, our achievement of earning the Crime Reduction Award is not merely coincidental, but a demonstration of how the highest level of performance earns results. I’m positive our team-based culture is and will continue to be the foundation of our success.

As we move into 2022, I look forward to building on the partnerships and programs we’ve established and maintaining the highest level of performance possible. By targeting specific neighborhoods, implementing new patrols and listening to our community, we’ll continue to see results from our supplemental patrols, bike units and strategic crime-fighting efforts. A great example of our partnership with the City of Atlanta is the new West Village Precinct. Opening its doors in May, the unveiling of this precinct represents a commitment by the APD, Buckhead Coalition and the administration to provide enhanced levels of patrols to our busiest areas in Zone 2. Despite the doors not being open yet, we have been able to assign five officers to this precinct due to newly sworn officers assigned to Zone 2. With the goal set at adding an additional 12 to 24 officers to staff this precinct, this is certainly an exciting time to be in Zone 2. We thank the City of Atlanta, Buckhead Coalition and community organizations for their support. My staff and I are confident that we have the blueprint in place to achieve the same success this year that we saw in 2021. 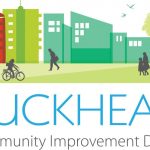