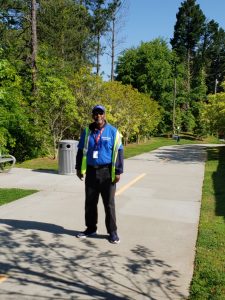 If you frequently walk or jog on PATH400, the man in this photo will need no introduction. Walter Dixon has been working with the Buckhead Community Improvement District since the early part of this year, performing the critical task of litter pick-up along the trail, in Charlie Loudermilk Park and along other major corridors in Buckhead. But it’s not just Walter’s hard work that make these areas more pleasant places to be – it’s also his presence. Walter is a warm, outgoing person who has quickly become an unofficial, one-man welcoming committee in our community. That’s why it was an easy decision for us to ask him to join the BCID staff in a full-time position as our programs coordinator.

Walter was introduced to the BCID through Georgia Works!, a program that serves men who have experienced homelessness, addiction, or criminal convictions, and it seeks to help them overcome these challenges to lead productive lives. While they’re in the program, clients receive a stable environment, counseling, employment, and housing. The goal is for clients to work through the program in a year or less and transition to permanent housing and employment upon graduation.

The BCID has partnered with Georgia Works! for several years. Through this partnership, BCID is assigned two or three clients who help with litter pick-up along major corridors within the CID and along PATH400, including at Charlie Loudermilk Park. The clients rotate from time to time, and Walter came to work with us in early 2020. Walter is nearing the end of his time with Georgia Works! and is planning to graduate by November.

“Walter is one of our ’star students’ at Georgia Works!,” said Darlene Schultz, CEO of Georgia Works! “He has worked hard, has a positive attitude and remained committed to the program and its rules the entire time he has been here.  Walter is graduate number 900 – this program works!  We are so proud of Walter and this life changing accomplishment.” 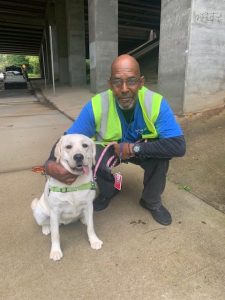 During his time working with BCID, Walter has made invaluable contributions. He works hard and has become an informal community ambassador, particularly with the residents along PATH400. We are proud and excited to support Walter as he graduates from the Georgia Works! program and becomes the BCID programs coordinator. In addition to continuing some of his duties related to litter pick-up on PATH400, Walter will help coordinate future clients from Georgia Works!, serve as “eyes on the ground” for issues such as graffiti and maintenance needs, provide handyman services, and continue to serve as an ambassador for the Buckhead Coalition and the BCID.